In the Kolshik video, Mikail Krug sings before a group of prisoners.  The song is called "Kolschik",
which means tattooist.  Krug was very popular in Russia among ordinary Russians, but not among
the authorities who criticized his songs for romanticizing prison life. 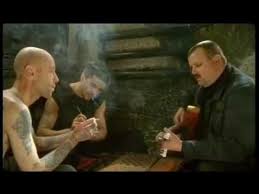 In it he tells the tattoo artist to show on his body a Russian church with
its kupola dome, a cross, icons and bells so that he and the other prisoners
who see it can imagine they are listening to them ring.  Then he sings, draw on me
a little cabin next to a stream which no fat judge can ever take away.  Next
he asks the the tattooist to show a rising sun and some roses behind barbed
wire and write the phrase, "Mother, I am not guilty" so that it can never be
erased.  And if there is still room on the canvass of my body, he sings, place a boat
whose sails are full of wind.  This is the way I always want to be remembered.

Krug's  "Vladimirsky Central" gives the perspective of being an inmate in Russia's
largest prison in Russia.  There are more than 1200 inmates there. Most are serving a minimum
of ten years.  It is a maximum-security prison.

Spring has come again
It brings a ray of warmth into my window...
But again its coming will tighten my chest
as sad memories come into my soul...

I think about that girl whom I loved so long ago.
How she went away and then returned.
Forget her?  I won’t have the strength…

There, under the narrow window, I feel the brief thaw
of my Spring.

I am glad that it has arrived, even if it's only this.
I still have this much.  But how I need your love…

Magadan is a northern Siberian port city.  Winters are very long. It was a major transit center for prisoners
sent to labor camps from 1932 to 1953.  A vast forced-labor gold-mining operation dominated the area.